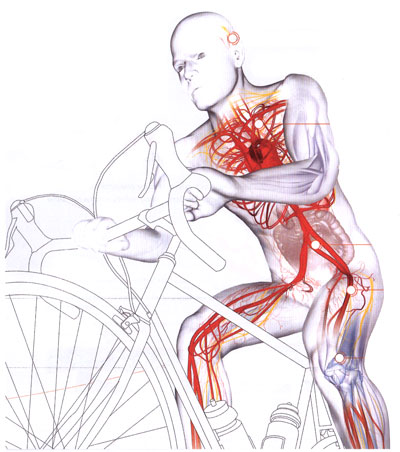 Many physical discomforts are directly related to a diminished circulatory system which can result in dysfunctional metabolic processes. 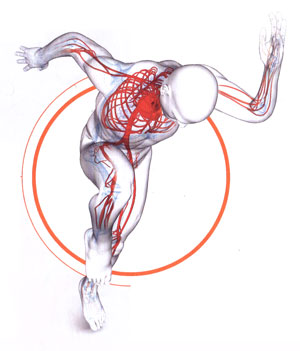 The body’s circulatory system ensures the survival of the organism by facilitating metabolism in each and every cell. This helps maintain self-regulatory mechanisms. First, blood transports oxygen from the lungs to the cells and exchanges it for carbon dioxide to be removed as waste. Second, it transports nutrients such as fats, carbohydrates, or proteins from the digestive tract to the individual tissues where they can be consumed, processed or stored as needed.

The resultant metabolic waste products, are then transported to other tissues and finally to the excretory organs such as the kidneys and colon. In addition, blood distributes hormones, immune cells, and other signaling molecules. The human body’s circulatory system is essential for providing the raw materials needed for energy production as well as physical and mental performance. Cells rely on the blood to deliver and remove what they need in order to perform their essential functions.

Only good, functional circulation ensures proper supply of nutrients and oxygen as well as proper waste removal within the body. This is fundamental for all metabolic processes. On this basis, it is clear what a critical role the circulatory system plays in overall health and well-being.

BEMER therapy is used for well-being, improved cardiac functions and physical fitness. The majority of the global population could benefit from using BEMER, and it is highly probable that you will, too.

IT IS HIGHLY LIKELY THAT BEMER CAN HELP YOU!

Research with Passion – Products from Conviction

Faith alone will not convince anyone in the fields of science or medicine. Since BEMER was first founded, we have done the hard work to research, document, and further develop our products on a scientific basis. Our success has proven that our approach was the right one. From its humble beginnings, our company has grown from a small office to a globally active corporate group with several thousand sales partners. However, the term “world-wide” does not capture the whole picture. We attracted the attention of some special people in Washington DC, which lead to a partnership between NASA and BEMER to design a prototype for a space suit. Equally important to us, are the more than one million satisfied users in the world. Discover what BEMER can do for your own health and that of your family. Give it a try.

In the beginning, we had nothing other than unshakable faith in the BEMER idea. Soon we were able to conduct our first double-blind experiments that attested to our products’ effectiveness. Today, several thousand people have participated in studies and user observations. The results can be found in the NCI database under pubmed.gov. A user survey revealed that every second user reported improved sleep patterns, and that two out of three users reported a significant improvement in their quality of life.

We began as a leading innovator in the Pulsed Electro Magnetic Field (PEMF) sector. Through ground breaking research, we were able to quickly reach a completely new level in the development of our technology. Today the only similarity between PEMF and BEMER devices is the electro-magnetic field. However, we do not use PEMF as an active agent but as a carrier for our unique physical signal configuration.